I teach people how to draw pictures

Regular readers will know that I'm a big fan of pictures, especially as a mechanism for communicating the structure of software systems. To this end, I sometimes introduce myself as somebody who teaches people how to draw pictures. This is often said with a smile, because on the face of it this is exactly what I appear to be doing. But there's less truth to this than there initially appears.

Something that we do on the full 2-day training course and the 1-day sketching workshop is to get people drawing some pictures to communicate the structure of a software system. This is either a solution to the financial risk system or their own software. Over the years, I've done this for thousands of people and pretty much everybody struggles to draw something that effectively communicates the software. The same challenges crop up again and again. 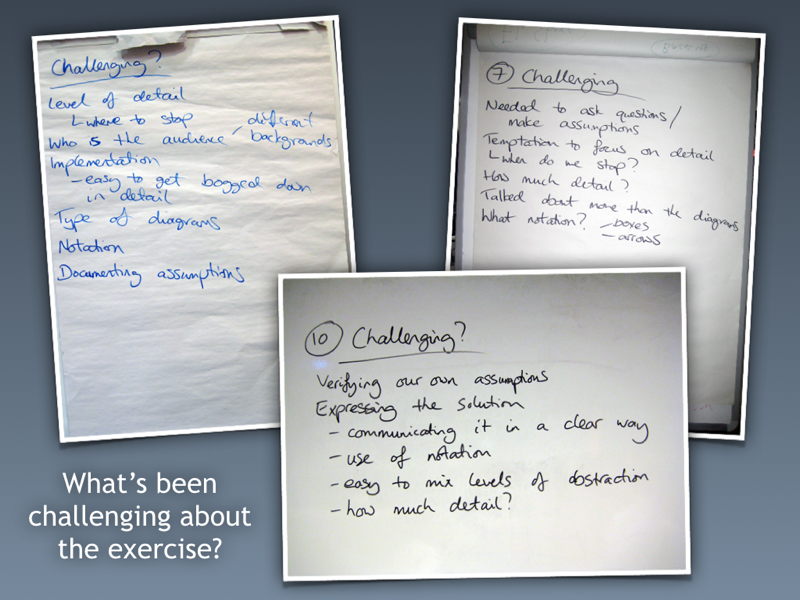 The diagrams that are produced during the initial 90-minute timebox are usually fairly confusing and exhibit problems ranging from a lack of clarity around the abstractions and notation used through to diagrams that show too little or too much detail. This is an aside, but the majority of the diagrams are informal "boxes and lines" rather than UML.

After some reviews and feedback, I introduce people to my C4 model. In a nutshell, it's all about thinking of a software system as being made up of containers (web applications, databases, mobile devices, etc), each of which contains components, which in turn are made up of classes. There are some variations of this depending on the technology you're using, but that's basically it. With this structure in mind, you can then draw a diagram at each level in turn, which leads to a system context diagram, a container diagram, one or more component diagrams and (optionally) some class diagrams. If you want a slightly more detailed introduction to C4, take a look at Simple sketches for diagramming your software architecture. 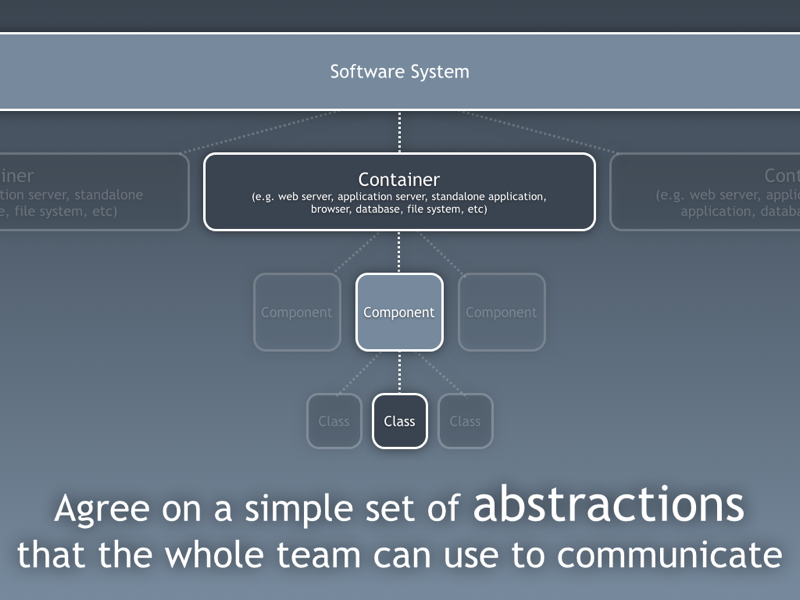 Back to the workshops, and iteration two is another 90-minute timebox in which teams can redraw their diagrams. I don't actually mandate that people should follow my C4 approach, but most do, and what happens next is really interesting. The conversations change. In stark contrast to the first timebox, the conversations are much more technical. Gone are the discussions about what to include on each diagram and instead the focus is on the technical aspects of the software. Instead of "what should we show on this diagram?", the questions I hear are more along the lines of "what are the responsibilities of this thing?" and "how does this thing talk to that thing?". In essence, the discussion returns to be about software design, which is exactly where it should be.

There are a number of ways in which you can communicate the architecture of a software system, so I don't want to pitch my C4 approach as "the one true way". What I do want to say is that providing even a little guidance in this area can go a long way. I ask people for their thoughts after the second timebox and the consensus is that the diagrams are easier to draw and comprehend because of the "framework" (their words, not mine) that's been provided. All I'm doing is providing some constraints that people might want to work within, and this frees them up to focus on what's important again.

Back to that comment about introducing myself as somebody who teaches people how to draw pictures. It turns out that this isn't actually what I do. I don't really care so much *how* people draw pictures. What I do care about is that they use a well-understood, consistent and meaningful set of *abstractions* to think about and therefore describe their software. It turns out that modelling our software isn't dead after all. ;-)

Comment from Fredrik Skeel Løkke on 29 July 2014 12:16:58 BST #
Do you have a cheatsheet or legend available for your C4 modelling abstractions? I would like to put one up in our team space for reference.
Reply

Comment from Simon Brown on 24 August 2014 23:16:39 BST #
Apologies, I'm just back from holiday and the version I had was a little out of date, so I've created an updated version. You can grab a copy at http://static.codingthearchitecture.com/c4.pdf
Reply